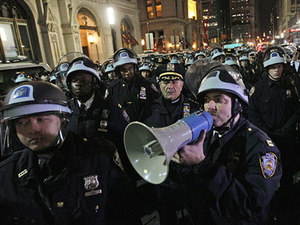 In a press release issued on November 15, the PEN American Center deplored the violation of press freedoms in connection with the Occupy Wall Street protests. Journalists (including reporters from news outlets including CNBC, NBC, CBS, The Wall Street Journal, and Reuters) were barred from streets in lower Manhattan surrounding Zuccotti Park, where hundreds of police in riot gear descended upon the park shortly after 1 a.m. on November 15, using pepper spray and by some reports tear gas to drive protesters from the encampment that had been the site of peaceful protests for nearly two months. Over two hundred protesters were arrested, some were beaten, and personal property was seized and in many cases destroyed.

Press attempting to cover the story were turned away; some who persisted in attempting to report the story were arrested or even beaten. As the PEN press release notes, “Julie Walker, who is reporting on the protests for NPR, was arrested and released late Tuesday morning, and Jared Malsin, a freelancer for the New York Times, was arrested and charged with disorderly conduct. Others were forcefully removed from the park or handled roughly by police.”

This blockade of the press ordered by Mayor Michael Bloomberg and enforced by the New York Police Department is part of a wave of media blackouts surrounding protests across the country. The PEN press release notes that similar tactics have been employed in “Milwaukee, Nashville, and Oakland, where a cameraman was attacked and left with a concussion.”

Reporter Luke Rudkowski captured video footage[2] of the forcible removal of the press from Zuccotti Park on November 15, including his own expulsion beginning at minute 5:00; police shoving press photographers aside at minute 8:30; and a journalist being forced to enter a police vehicle at 9:50.

I have written in more detail about the events of November 15 and their implications on my blog Translationista[3].

In response to this alarming use of force against peaceful protesters right in our midst and violation of the press freedoms that are an essential part of a democratic society, Laura McVeigh, executive director of PEN International, has issued the following statement: “At a time when freedom of expression is under threat worldwide, this denial of media access and restriction on press coverage is shameful and undemocratic. It sends the wrong signal to the American people and to the rest of the world.”

Occupy Wall Street has called for an International Day of Action[4] today to protest the violent suppression of protests as well as the financial and political inequities that occasioned these protests in the first place. Protesters will be joined by union members and thousands of supporters today at Wall Street, selected subway stations, and Foley Square.

Acquire this Domain
You can acquire this site’s domain name! We have nurtured its online marketing value by systematically curating this site by the domain’s relevant keywords. Explore our content network – you can advertise on each or rent vs. buy the domain. Buy@TLDtraders.com | Skype: TLDtraders | +1 (475) BUY-NAME (289 – 6263). Thousands search by this site’s exact keyword domain name! Most are sent here because search engines often love the keyword. This domain can be your 24/7 lead generator! If you own it, you could capture a large amount of online traffic for your niche. Stop wasting money on ads. Instead, buy this domain to gain a long-term marketing asset. If you can’t afford to buy then you can rent the domain.

About Us
We are Internet Investors, Developers, and Franchisers – operating a content network of several thousand sites while federating 100+ eCommerce and SaaS startups. With our proprietary “inverted incubation” model, we leverage a portfolio of $100M in valued domains to impact online trends, traffic, and transactions. We use robotic process automation, machine learning, and other proprietary approaches to power our content network. Contact us to learn how we can help you with your online marketing and/or site maintenance.

This website uses cookies to improve your experience while you navigate through the website. Out of these cookies, the cookies that are categorized as necessary are stored on your browser as they are essential for the working of basic functionalities of the website. We also use third-party cookies that help us analyze and understand how you use this website. These cookies will be stored in your browser only with your consent. You also have the option to opt-out of these cookies. But opting out of some of these cookies may have an effect on your browsing experience.
Necessary Always Enabled
Necessary cookies are absolutely essential for the website to function properly. This category only includes cookies that ensures basic functionalities and security features of the website. These cookies do not store any personal information.
Non-necessary
Any cookies that may not be particularly necessary for the website to function and is used specifically to collect user personal data via analytics, ads, other embedded contents are termed as non-necessary cookies. It is mandatory to procure user consent prior to running these cookies on your website.
SAVE & ACCEPT
Generated by Feedzy